How It Is in Common Tongues 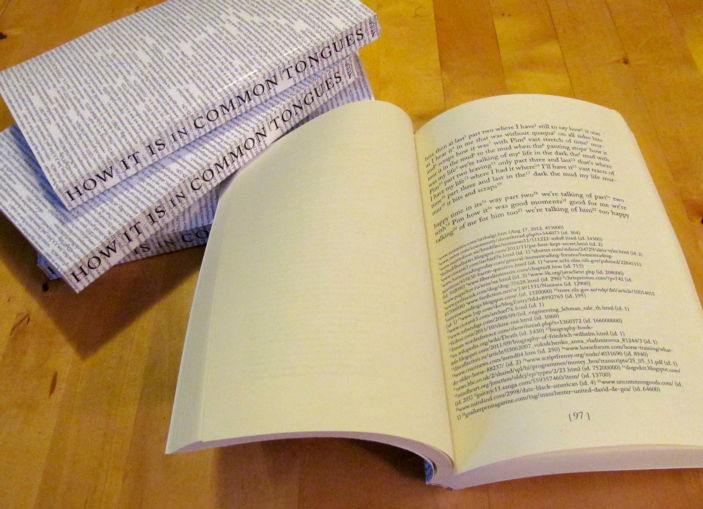 As a gesture to the latter days of print, as a computational sculpture for the passing archive, The Readers Project offers this print-on-demand publication generated by certain processes of its 'reading through'—the exhaustively annotated How It Is in Common Tongues

How It Is in Common Tongues was composed by searching for the text of Samuel Beckett’s How It Is using a universally accessible search engine, attempting to find, in sequence, the longest common phrases from How It Is that were composed by writers or writing machines other than Beckett. These phrases are quoted from a portion of the commons of language that happens to have been indexed by a universally accessible engine.

How It Is in Common Tongues is an art work, and an aesthetic outcome of The Readers Project.

There is a live reading of 'The Image' from How It Is in Common Tongues on this site. 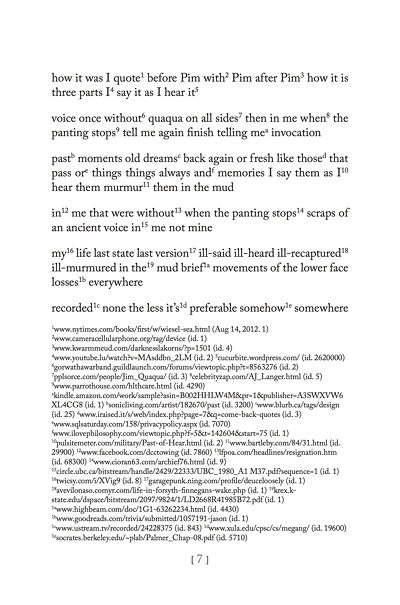 The notes at the bottom of each page in the book give the shortest url (often one of many) that the readers were able to retrieve for the phrases cited. The first in a sequence of citations provides, in parentheses, the date when the phrase was found on the web page given, and immediately subsequent citations will have ‘id.’ instead of a date, where this is the same as that last provided. The number following the date (or ‘id.’) is the total number of occurrences found for the phrase, as searched on that date and for the search engine we used. These note numbers are in hexadecimal.

This artists' book is produced in an edition limited to 256 copies, numbered 0-ff. The first f copies are not in circulation. 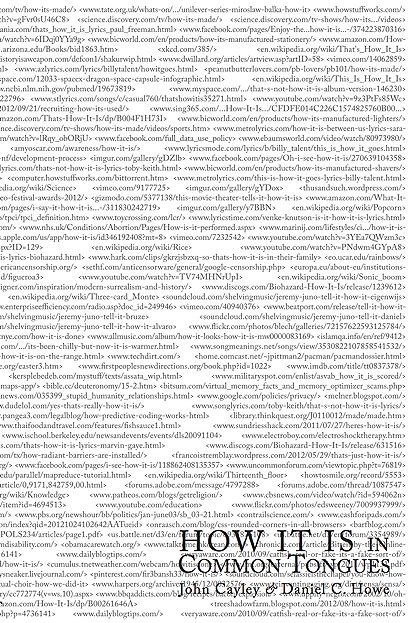 How It Is in Common Tongues is officially hors de commerce. All monies are received from those contracting to obtain a copy in the form of a donation, with any surplus over costs donated to the EFF and related charities or advocacy groups.